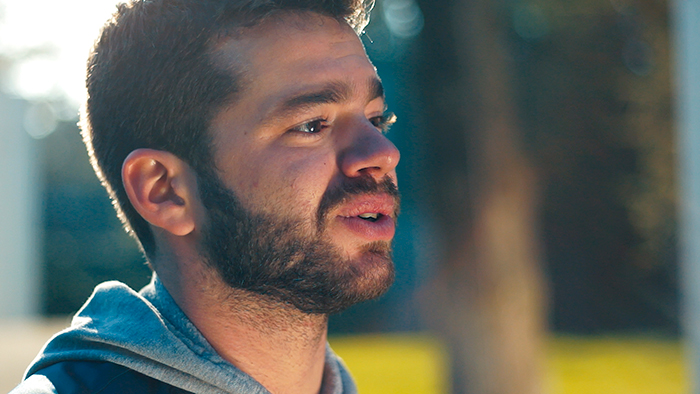 Fer Francés is, most of the time, a gallery director. His work in this field began when he was only 18 years old, when he began working with Moscow’s XL Gallery in various international exhibitions. He then continued in the same position at the Tim Van Laere Gallery in Antwerp, all while studying museum and gallery administration and Art History at Kingston University. Before ending up as director at the Javier López Gallery, which he recently joined, he worked as an assistant to curator David Zwirner in London. He points out that he is possibly one of the youngest, if not the youngest, gallery directors in the country. Along with that work, he has always been active in curatorship, experiencing the realities of the art world thanks to the profession of his father, the director of the CAC Malaga, where he worked as a fitter and driver, getting to know the system up close.

As a curator, he has always been drawn to public art because of the broad audience city murals can reach, and because all citizens can equally enjoy it. He believes his work as a gallery director limits his ability to disseminate the work of certain artists at such a broad level, so he believes that the two functions work together perfectly. In his opinion, muralism functions as a loudspeaker to promote interest in art in members of his own generation, and it’s a good foundation to become familiar with contemporary art: “Public art can help to democratize contemporary art, thereby increasing the number of young spectators in museums and galleries; it opens up the possibility of them becoming future art lovers, and even future collectors,” he jokes. Francés is also currently starting development of the FRÉ brand as a means to collaborate with artists (he has already produced various t-shirts and even the vinyl “Voces del Extremo” (Voices of the Extreme), by El Niño de Elche), and he is also the producer of a documentary on the artist Phil Frost.

One of the projects for which he is perhaps most well known is the MAUS of Malaga, which connects him to street art, a subject he says he has always been interested in since adolescence. A trip to Berlin allowed him to visit an exhibition of the toy collector Selim Varol, who over time amassed a collection of multiple toys and, later, of original works that today number 3,000 pieces, which are added to his almost 15,000 toys. “If they value these artists in other countries, why couldn’t they come here to our institutions?”, he asks. Thus, the exhibition ended up at the CAC and was the impetus that got that center interested in street art, and it also convinced the city’s politicians of the possibility of transferring Andalusian capital into an urban art program, which was linked to the demands of residents who requested the rehabilitation of certain neighborhoods they considered abandoned.

In two editions, MAUS brought almost twenty international artists and more than two hundred local artists to Malaga, where they divided up the streets, proposing a very educational visit to these types of urban strategies: “There are other street art projects that are aimed more at discovering new values. I wasn’t as interested in that as I was in the major artists, who – some of them because of their age – are not as active or didn’t have murals in Europe. The ultimate intention is to create a great open-air museum, using artists that have played a part in the history of the movement, to create a sort of street art retrospective and, at the same time, a sketch of the different styles of mural painting and graffiti”.

In that project, Francés points to a section called “The Gallery”, with many similarities to what is now the TruckArtProject, the initiative of Jaime Colsa, of which Francés is the contemporary art curator: “The Gallery is in a pedestrian tunnel that closes at night, which allows us to invite more conventional artists such as Simon Zabell, Antonio Montalvo, Javi Calleja, Irene Sánchez and José Medina Galeote, twelve in total, partnering renowned artists with Fine Arts students that respected the formats of the canvas, in order to take them to the street and emulate the space where they usually exhibit. Visually, it functions as a museum or gallery exhibition, but outside”. Francés again says that street art appeals to him because of the interest it generates among younger audiences, something which, in a way, he is also pursuing with a project like TruckArtProject, but in a more ambitious way, with a desire to surprise all types of audiences, in situations outside of the context of the art world, and in motion.

The gallery director explains that his involvement in Colsa’s project, in which the trucks become the canvas for a considerable group of acclaimed artists, has been going on for a year and a half: “It was Óscar Sanz, the other curator of the initiative, that contacted me. We’re very good friends, and his office was very close to my residence. He presented the project to me, he explained his idea of making it exclusively street art, and at that time I gave him some advice and wished him luck, without getting much more involved. Over time I met Jaime, and although I resisted getting very involved with him because I was very committed to the projects I’m still working on, in the end he convinced me”.

Francés again recalls that the primary idea of TruckArtProject involved only urban and graffiti artists: “That was interesting to a certain point. But there’s already a history of graffiti on trucks. There are quite a few videoblogs and Instagram accounts with trucks painted with graffiti. So I didn’t think we were going to offer anything new in that sense. The interesting part was to involve active contemporary, acclaimed and underground artists, and not just painters, but also photographers, filmmakers, dancers, musicians, and multidisciplinary artists, so that they could take this project on as a challenge”.

This new perspective introduced by Francés has opened the TruckArtProject to artists such as Marina Vargas and Abraham Lacalle. It has also made participation possible for other artists that work outside of traditional canvases and have never painted, such as Carlos Aires; or a filmmaker such as Chiqui Carabante, who will approach the large vehicle using his audiovisual tools. “By involving people from the dance and theater worlds, the range of disciplines used will be broadened, and the effects of the initiative will multiply”. Today, Fer Frances is a highly involved curator with the project, which is necessary, given its large scale: “Jaime intends to have one hundred trucks worked on. But I think the big challenge is to broaden the amount of disciplines involved as much as possible. One of the ideas we’re going to do soon is to invite musicians to create sound art with the parts of the truck, maybe with the exhaust pipes, who knows!”

“Right now,” he continues, “we’re happy with what we’ve done. Eight trucks have been finished. We should keep in mind that all of the financing comes from Jaime Colsa’s pocket –although the project’s creators haven’t ruled out the possibility of having sponsors or other types of outside financing in the future – so we can’t go at a breakneck pace in producing the works, although that’s not the goal anyway. Nevertheless, no matter how much we have, we’ve developed a very good list of participants, and we’re very satisfied with that and grateful for their trust. Very shortly we’ll also have international artists, which expands the project’s ambitions even more”.

In two years, TruckArtProject has advanced significantly. Its curator acknowledges that it has advanced most in the last three months, which is when all of the production has taken place. “The most significant twist may be the participation of Carabante, the filmmaker, who in the next few days will finish his piece, which is a portrait of Marina Vargas, another one of the participants, and which will be the first project that’s not done physically on the truck”. His work is a sign of the changes that the initiative could undergo in the near future.