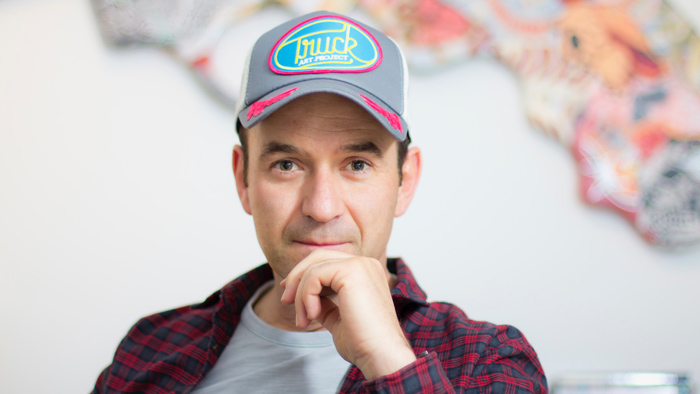 Jaime Colsa (Cantabria, 1972), the sponsor of TruckArtProject, is a Spanish entrepreneur (founder and CEO of the Palibex transport company), a collector and aficionado of contemporary art, and is drawn to different aspects of culture, from music and theater to urban creation. Conversation is easy with him because, beyond his position and responsibilities, he is an accessible man, warm in conversation. Colsa describes himself as “an active and restless subject”, which we can translate as a bold entrepreneur, although he himself has doubts and suspects that the term is too big for him when it comes to his involvement with artistic creation.

But he is just that, not only because of his own collection, which is enough to firmly link him to the world of contemporary art, but also because of his work as a producer, which has led to the consolidation of a variety of projects: “I don’t consider myself an artist”, he tells me, “but I like to share in creative processes and in what artists do. In that sense, I like to snoop around, experiment.” As such, he has sometimes acted as a small-scale producer, assisting musical acts and plastic artists, an activity that, in his own words, allows him to learn: “To learn how a specific cultural context works, what its players need and what the sector’s needs are.”

And he takes pride in the fact that he does it all for non-profit: “When I was younger, my business mentality pushed me to try to get a profit out of everything I did. Now I’m 43 years old and I’ve realized that you can’t maintain the mentality of your profession in other facets of your life. I’ve discovered that my work at the company is what helps me earn a living, generate income, so that I can enjoy the other activities I participate in”.

His relationship with the artists he modestly helps or works with is sincere and real, without meddling in the processes. In recent years he has backed the filming of a pair of short films, the creation of large urban art murals, and the production of exhibitions for artists “that had good ideas but were lacking money.” “As far as I can remember, as long as I’ve had a few euros in my pocket I’ve liked participating in micro-patronage projects. Now I have a greater capacity to do it, so I lean towards more ambitious challenges.”

TruckArtProject is the alternative formula put into action by Colsa in order to continue “collecting” art, although through other channels, and although the entrepreneur is aware that in the end he’ll never be the owner of what he’s helping to set up now. But his own personal collection is, in his opinion, a modest one, started when he made his first purchase at only 16 years old: “It was at ARCO”, he explains, “and the price of what I bought – 12,000 pesetas back then – was the least of it, although for a kid my age it meant having to give up certain things. That screen-printing by a Czech artist that I got has a big sentimental value for me, because it was the beginning of it all, a heartbeat”. Colsa also remembers with fondness how in his evolution as a collector, his involvement with 9915 has always played a big role, as has his friendship with another Cantabrian entrepreneur, Jaime Sordo, president of this fruitful association of collectors in Spain.

His collection has gone through different stages, and in the last three or four years – coinciding with the development and unfolding of his current business project –, his trajectory has grown and consolidated: “Now I spend more time in Madrid, with better connections, and with greater financial leeway to buy. My collection isn’t meant to be an investment. It comes from my personal tastes, my experiences and my own feelings. The collection mainly consists of painting, although there are examples from other disciplines. In fact, one of my most recent acquisitions is a photograph by Sonia Higuera that I got at ArteSantander”.

The most recent acquisitions of this young collector express a specific political and social message: “In that sense, there’s been a shift from my beginnings, when I was drawn to big recognizable names (Tàpies or Chillida), to the present. Now, my interest has changed from late 20th century art, to more contemporary creations, the art that I live with and that speaks to issues that affect me”. Some of the names in that group, such as Abraham Lacalle, Javier Arce, Javier Calleja, Carlos Aires, and Marina Vargas, appear in TruckArtProject. Along with those, there are examples of Manuel León, Kepa Garraza, and Rafael Macarrón, to mention a few names. “It’s mainly Spanish art, young art, but not emerging or unknown, and I stay away from sensationalism. I value trajectories, having a concept behind the work, but not just that. In my opinion, the political and social indignation that we’ve been living through the past few years must be expressed and reflected in art. The messages of Javi Calleja or Kepa Garraza, hanging from my walls, speak for me, especially if that wall is in an office. That gets my adrenaline going.”

TruckArtProject is part of the contemporary art bent of its promoter, who, in a new chapter as a patron, is demonstrating that it is possible to foster and enjoy contemporary art.